Purpleeeeeeeeeeeeeee (Read:I couldn't think of a title for the life of me)

When it comes to makeup, one of the colours that attracts me the most is purple. This is a purple look born out of lethargy on a boring day off when I couldn't get my ass moving for the life of me. Applying a few coats of makeup always helps me to get going! 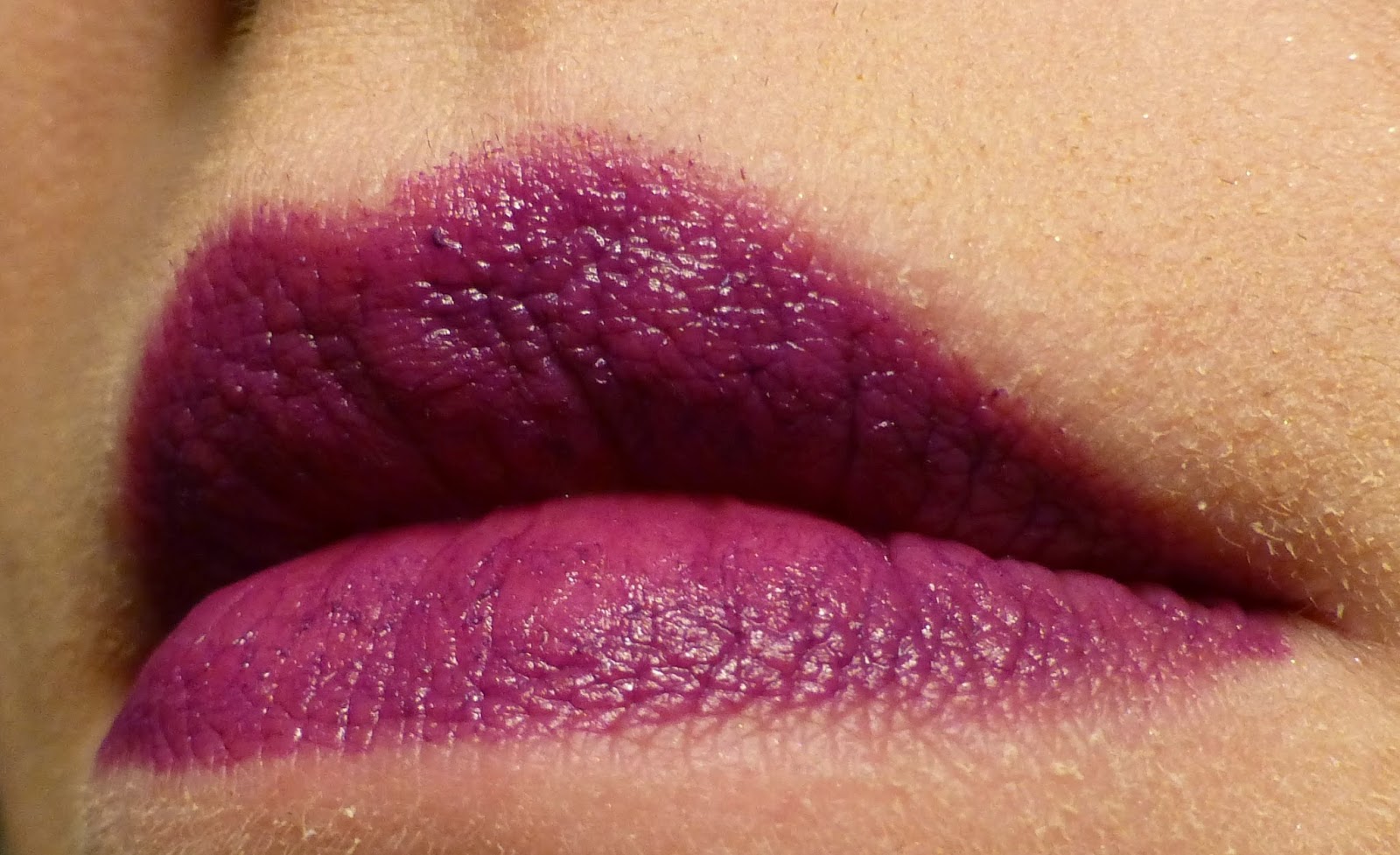 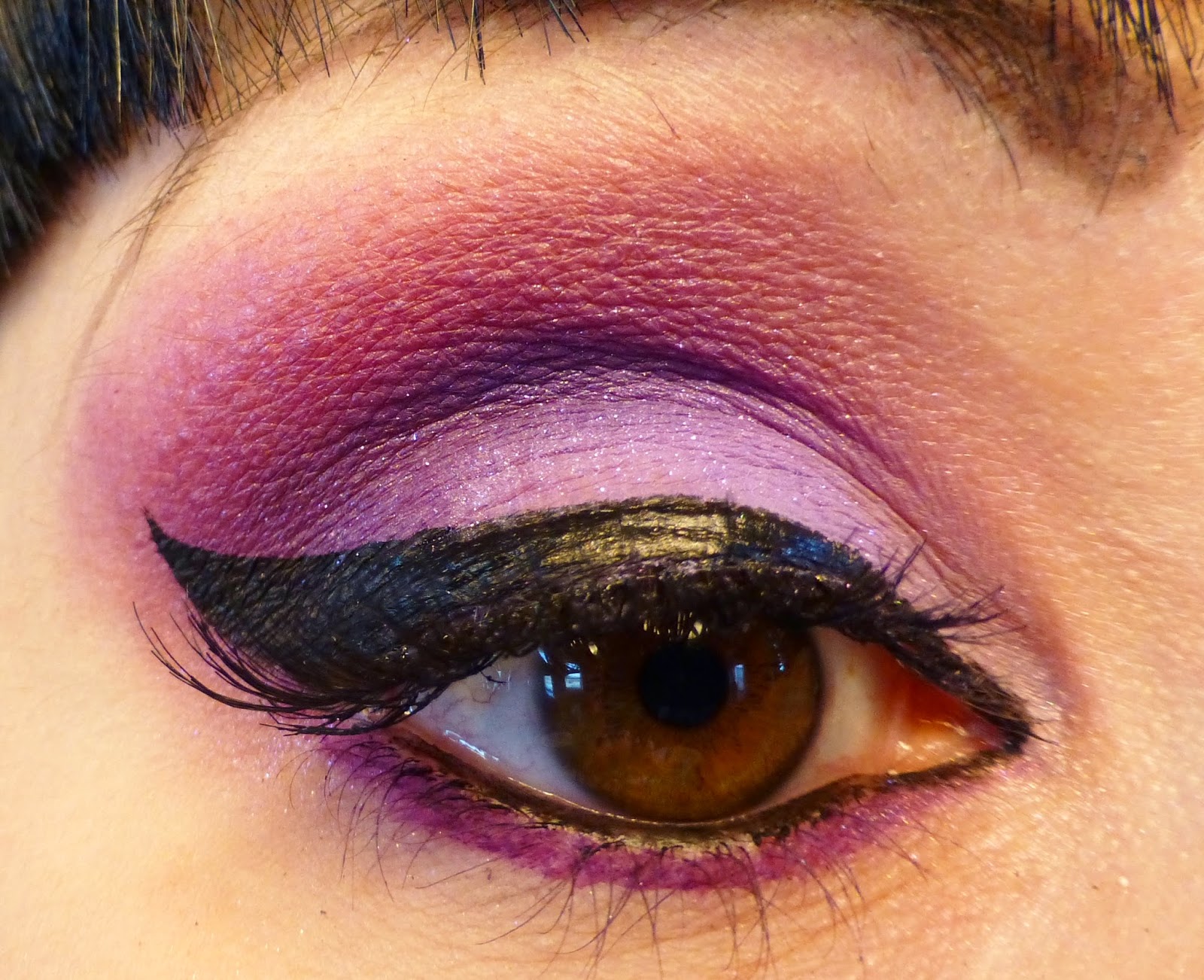 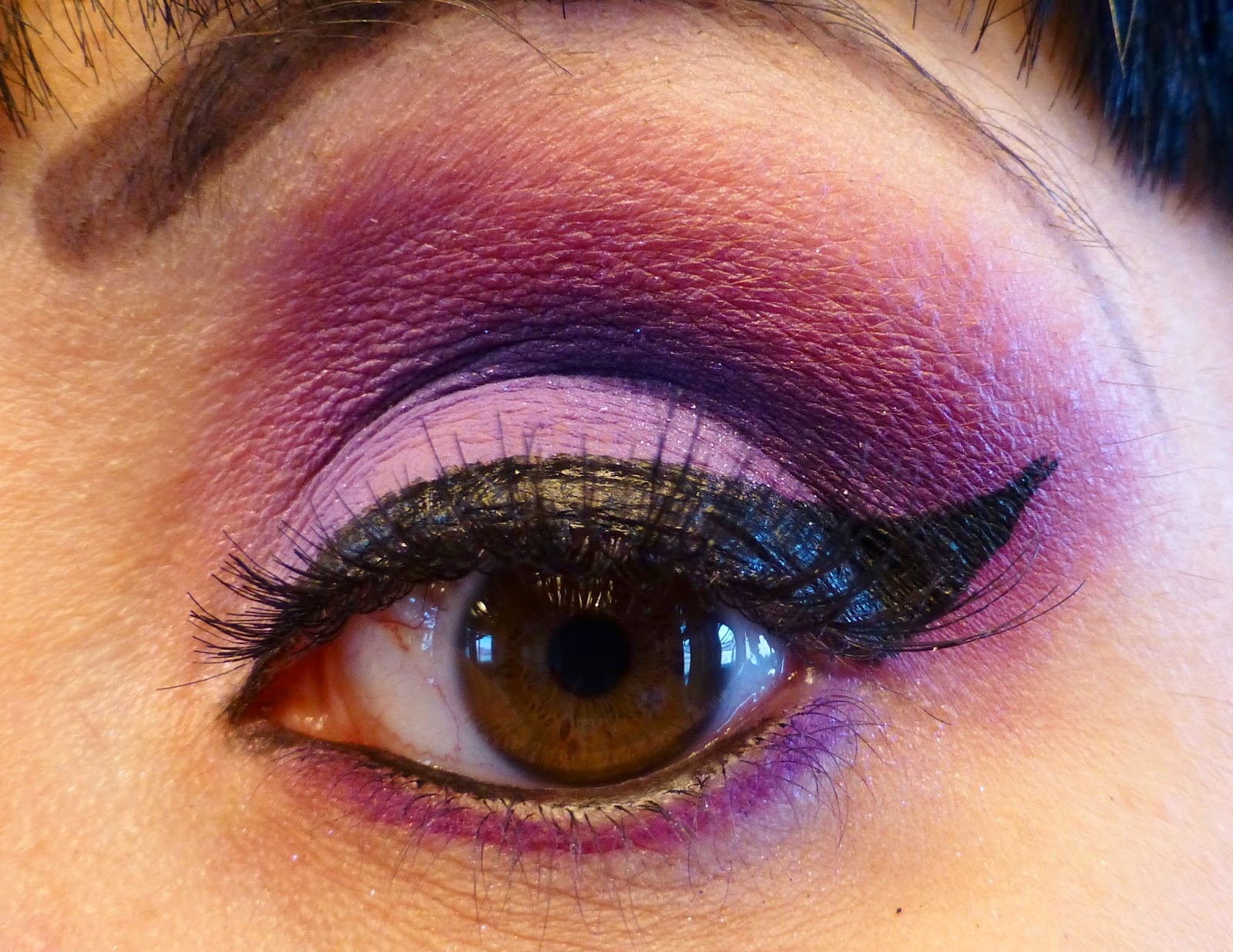 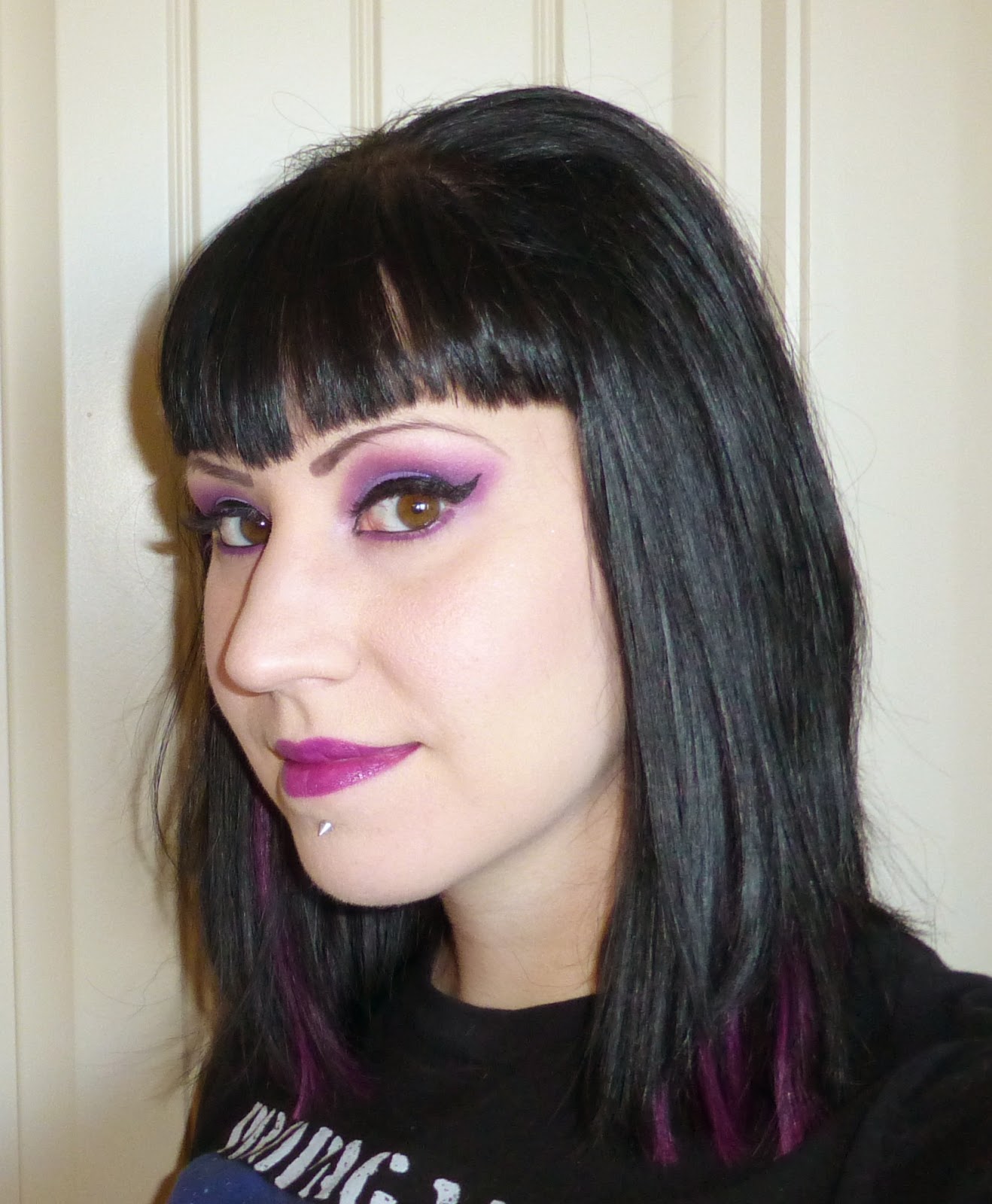 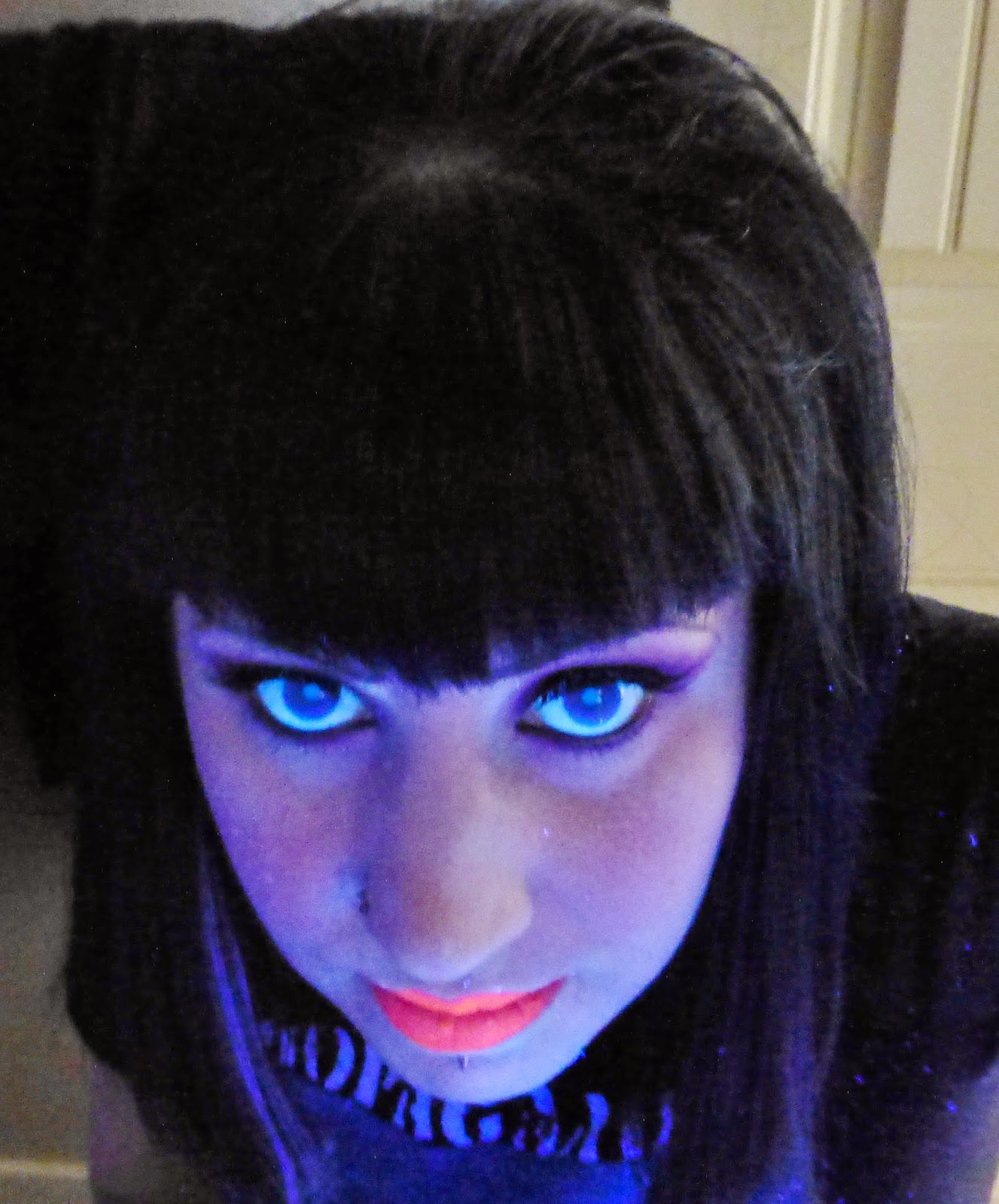 Do you feel more productive when you slap on some makeup?

Posted by Vulcan_Butterfly at 11:28 AM 6 comments:

Sometimes, I fall into makeup ruts. I do not feel very creative sometimes so I end up doing the same things over and over again. For example, If I am going out, I end up defaulting to black/silver/gunmetal eye makeup, false lashes + dark lipstick. While this is great and always works with club outfits, it gets a little OLD sometimes and stifles my creativity in the makeup department. You don't get any better at makeup if you don't try new things!

Anyway, a while ago, I got a new huge necklace from a local corset shop. 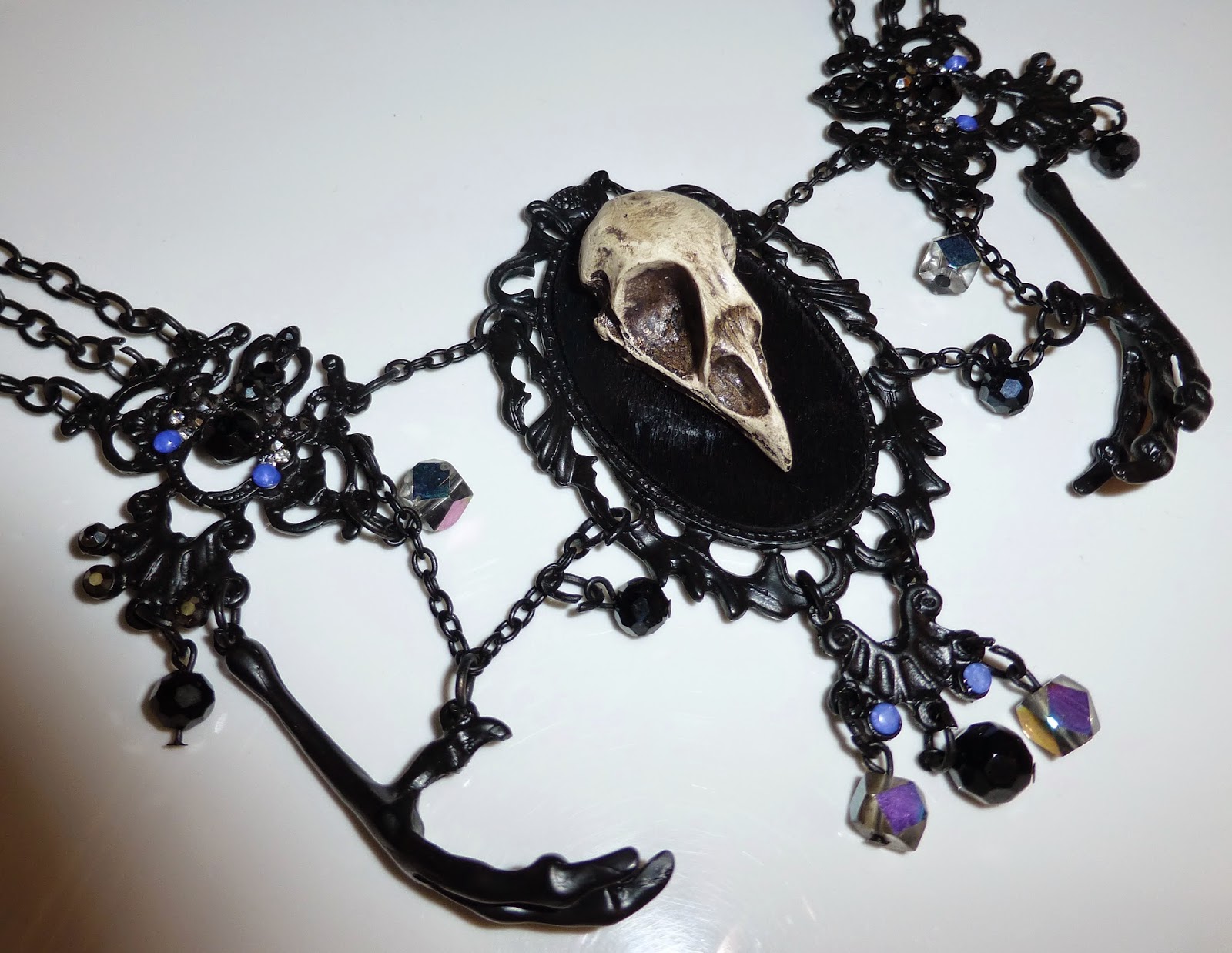 It has beads on it that sort of have an "oil slick" kind of effect where they shine purple, gold or blue depending on how the light hits them. I thought I would try something a bit more colourful than usual with my makeup; I tried to use the colours of the beads and go for a bit of a duochrome effect. It was definitely not something that I would usually do but I ended up liking it and it felt different and fresh! 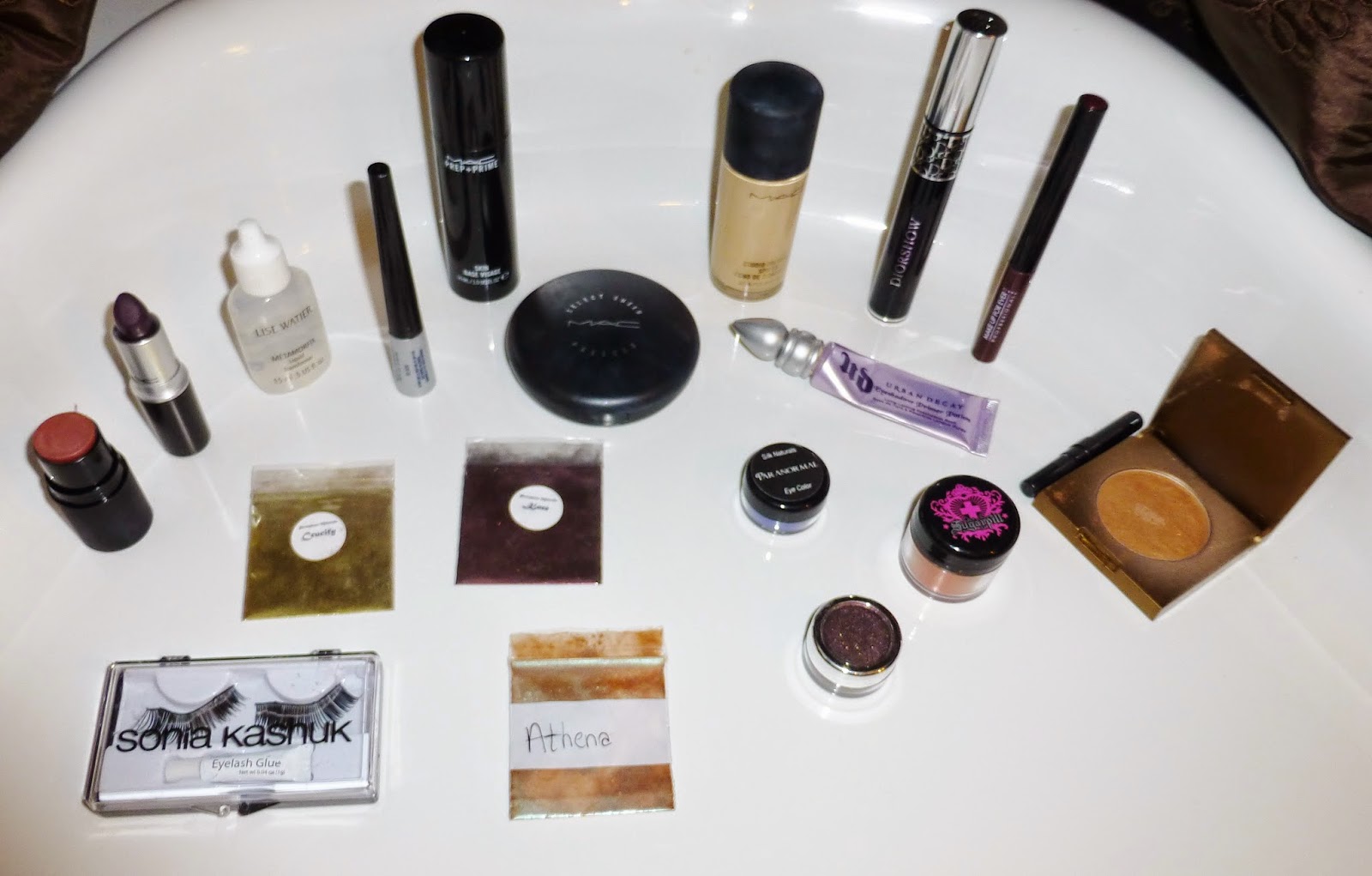 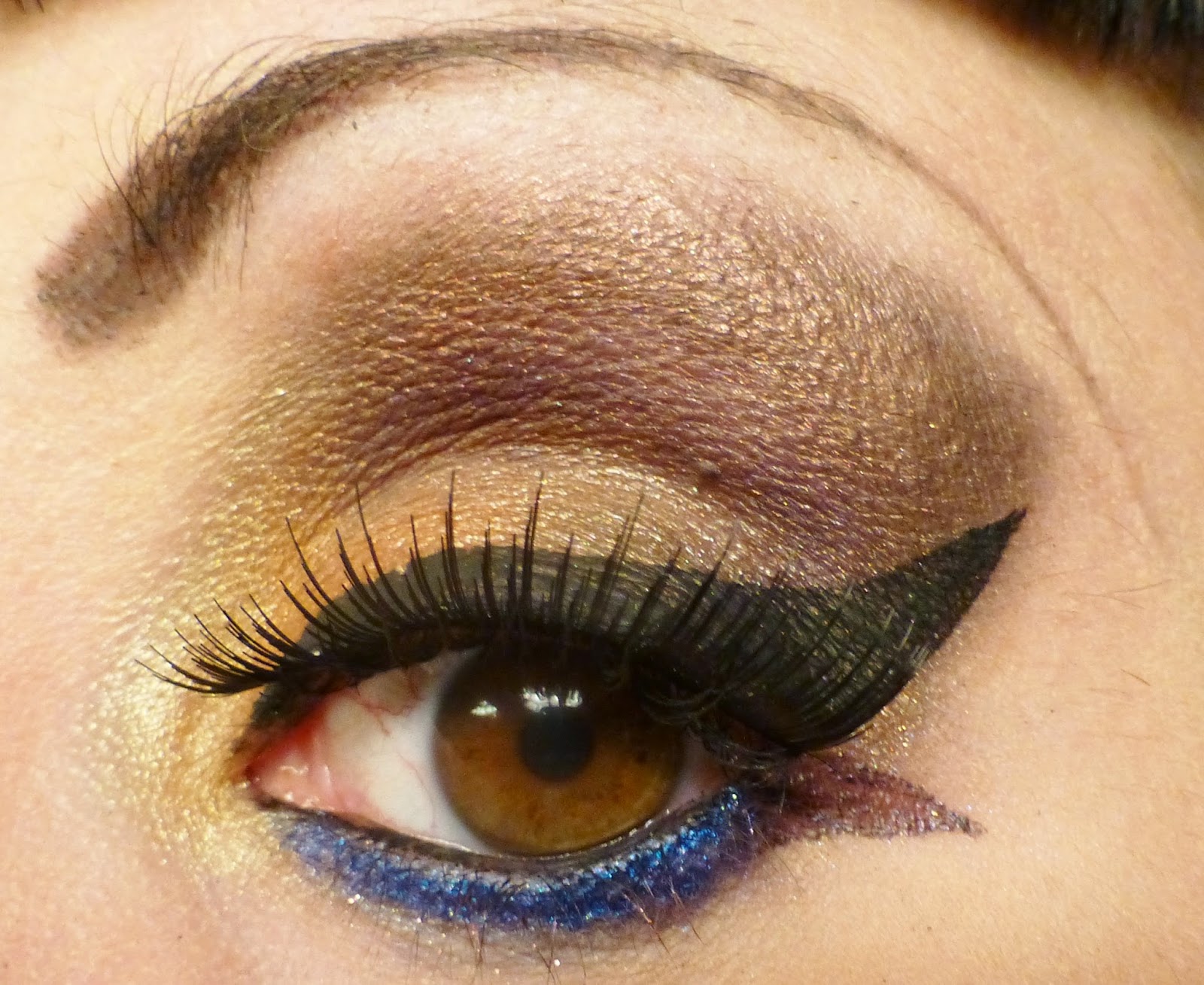 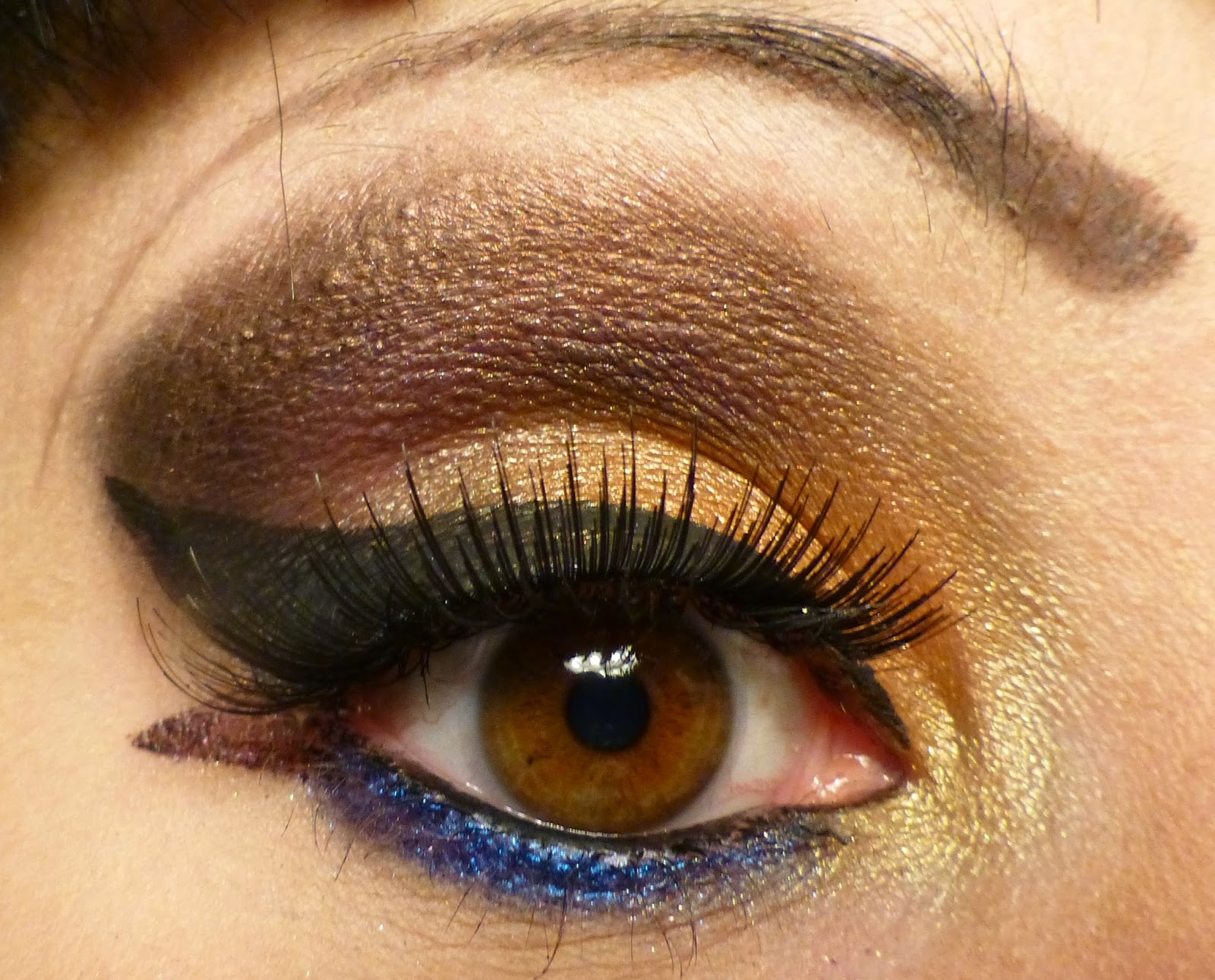 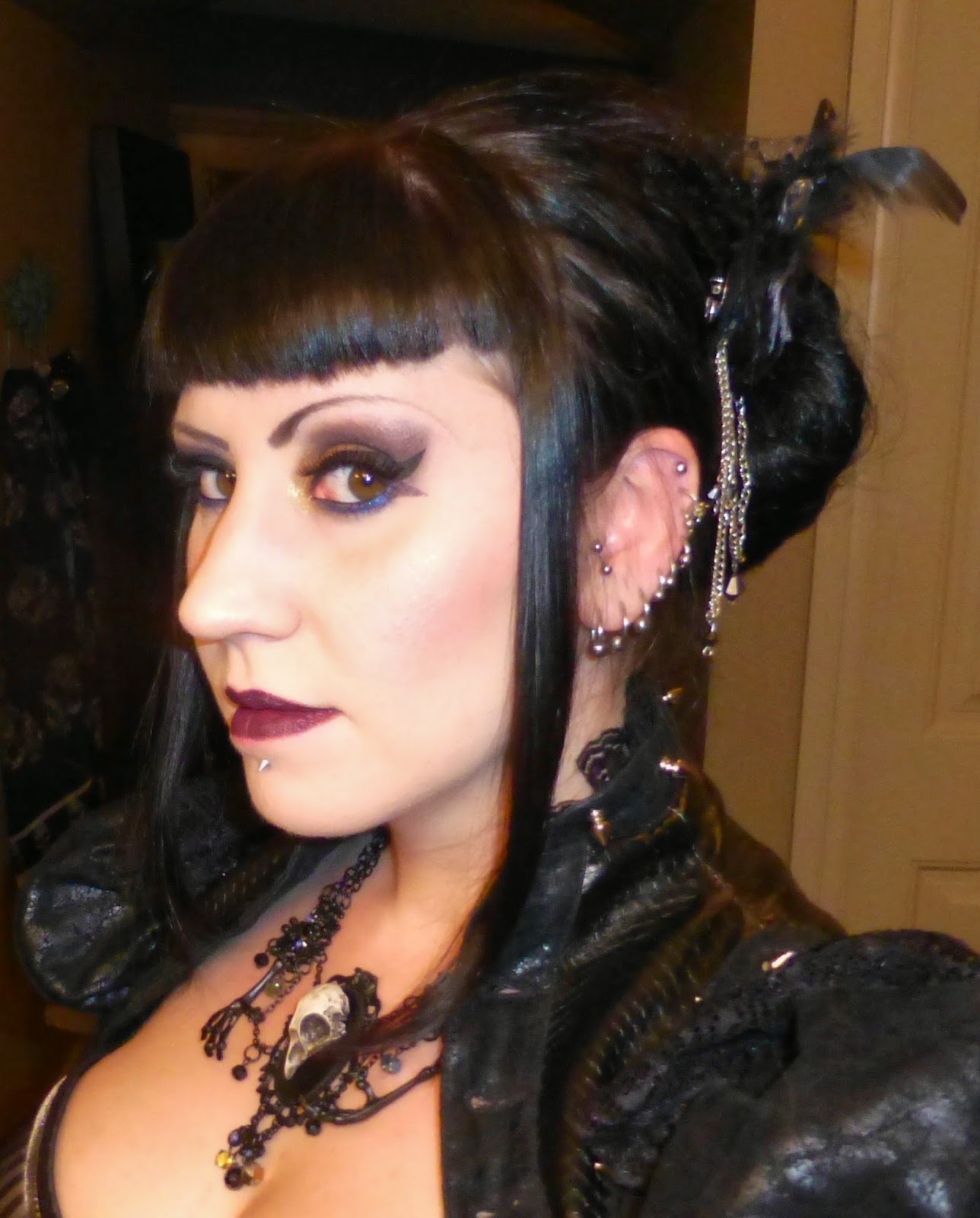 
Do you ever get stuck in a makeup rut? What sort of looks do you default to when you aren't feeling creative?

Posted by Vulcan_Butterfly at 12:29 PM 9 comments:

WOOO-HOOO!! Fall weather is here! It is time for scarves and tights and nice clothes and jackets and boots.....well, not boots at the moment since I broke my damn toe, but still!! Here is the last summer look I will post. When shopping my stash, I found my Stila Travel Girl Trendsetting in Tokyo palette. I just LOVE the colours in this one because I wouldn't have thought to put them together myself and the bright colours are very summer-y! Also, I love pink but find it hard to make pink makeup look good on me; the pink in this palette seems to serve me well! For this fall, I am loving dark navy and cobalt blue so I might be cracking out this palette for some fall makeup as well. 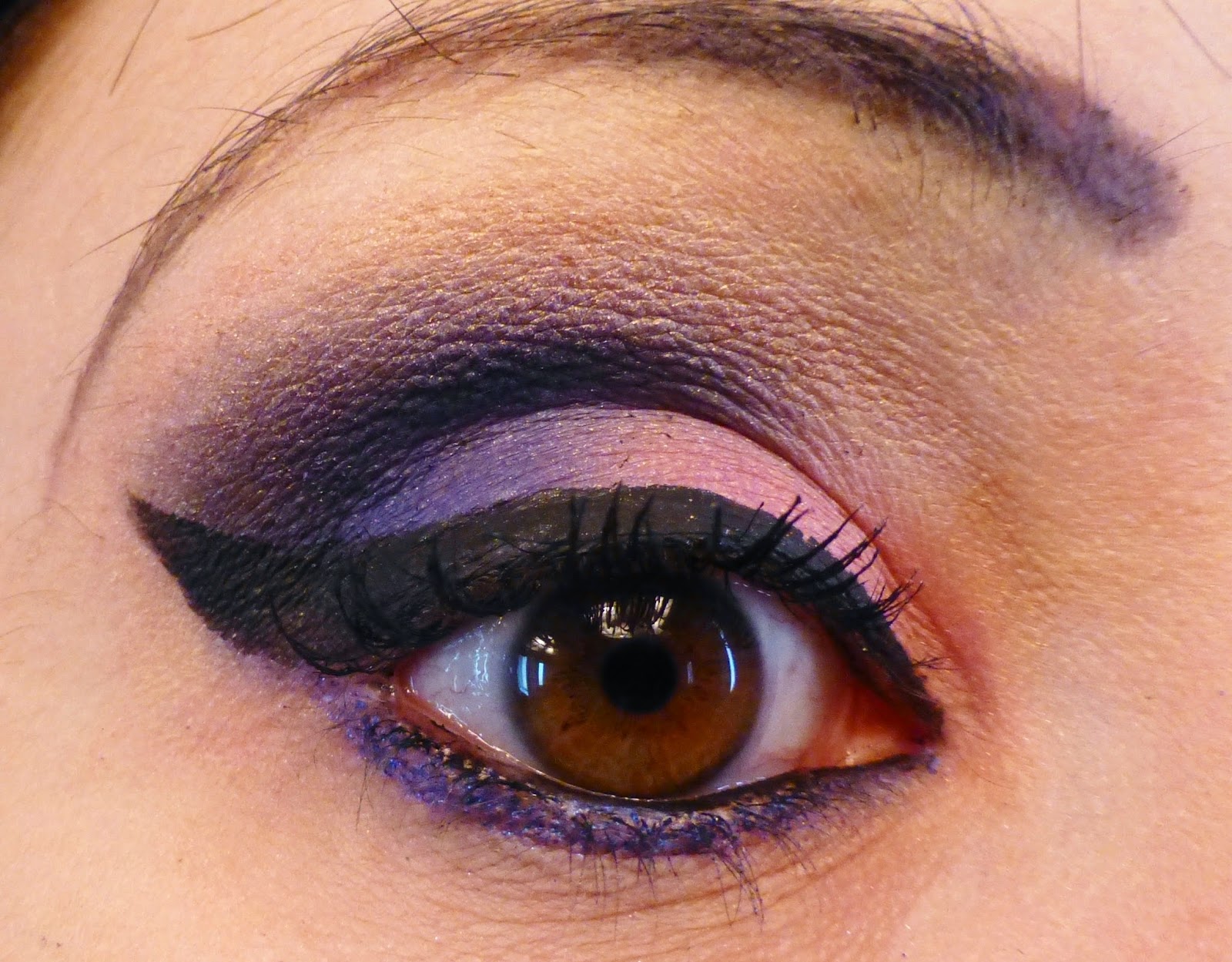 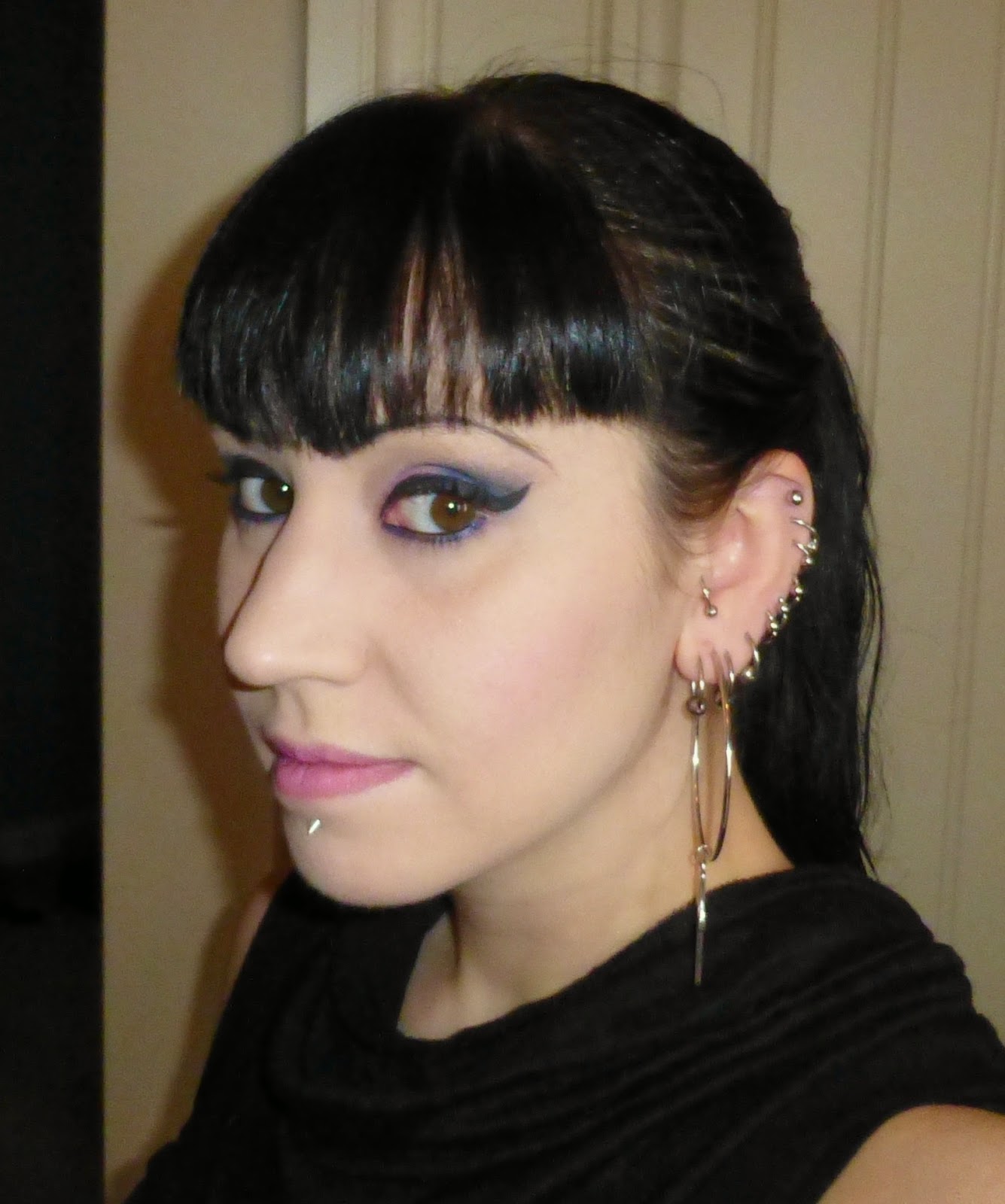 My full-face pictures didn't really turn out, my hair was going all weird because it was humid that day (this look was from the summer). I posted a picture anyway because I like how the blue eye shadow and liner look with my eye colour! I think the blue makes my brown eyes look a lot richer and deeper...or something.


What colours are you loving for fall?
Posted by Vulcan_Butterfly at 12:22 PM 8 comments:

An Ode to High Heels

Two weeks ago, I broke my toe by tripping over a piece of furniture in my bedroom like an idiot. It looked pretty gross; it was sticking out to the side and everything! It was quite painful at the time and has been causing me some issues with walking and at my job at which I stand all day. The biggest issue, however, is that I CANNOT WEAR ANYTHING EXCEPT RUNNING SHOES RIGHT NOW. Which means NO HIGH HEELS. I was told that I could not wear high heels for 4 to 6 weeks and my toe hurts so much that the only shoe I can get my foot into and walk around semi-comfortably in is a pair of old gym runners.

I look pretty silly going to work in my professional clothing (dresses and skirts) and wearing runners on my feet. At first I figured it wasn't that big of a deal because you do what you have to sometimes and appearance isn't EVERYTHING but now it is REALLY starting to get me down!

High heels make me feel GREAT. I stand straighter and taller, I have confidence, and I feel like I am put together. I enjoy clothing, makeup and fashion and I feel 100% better when I get up in the morning, shower, do my hair, do my makeup and put on a nice dress, jacket, and pair of high-heeled boots. When I feel put together, my mood is better and I feel like I can take on the day! My clothing and makeup style are also a form of self-expression and creativity for me. It was irritating enough when I had to tone down my style for the dress code in my line of work, and it is really driving me nuts to not be able to wear the shoes that I like. Also, I don't care if other people see me wearing runners with a dress and think I look ridiculous. At this point in my life, I dress in a way that makes ME feel good about myself, and I DO NOT feel very good about myself walking around wearing shoes that I would usually wear to exercise or dig up crap in the yard.

It is finally boot weather where I live and I have a lovely new pair of boots for work sitting in the closet along with a gorgeous new pair of leather and suede ankle boots for fall outfit-making.  I also have a new pair of black and iridescent green 6 inch heels for clubbing purposes. I cannot wear them. OH, THE SORROW!!! *SOBS while scrolling through the Solestruck website*

Anyway, here is a beautiful pair of high heels that my friend gave me. She bought a pair of black heels and artfully added spikes, studs, and chains to the back. I wear them with my alternative wardrobe as well as with my more mainstream clothing to spice things up a bit. (I can't get my foot into them now, *sob*) 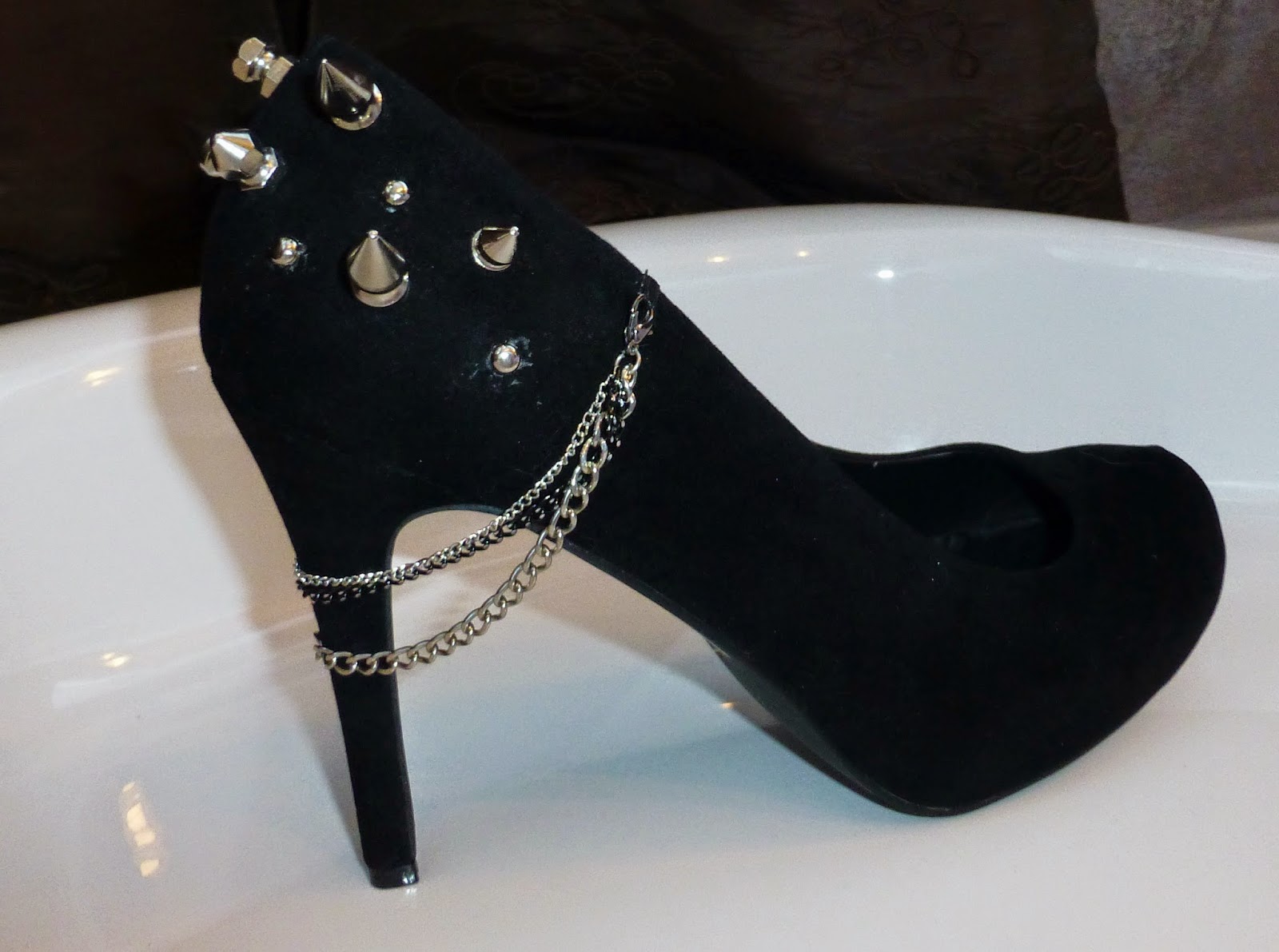 I wore the following outfit to dinner with a group of friends at a nice French restaurant. I like this dress because it is super comfortable and light-weight for when it is HOT in the summer. Thankfully, the cooler weather has blown in and it is time for FALL clothes!

*Also, just to clarify, I know I am being over-dramatic and that this is a silly first world problem.*

Do you have an element of your style that you would have a hard time living without?